Sasha Gorer, Co-Founder and Chief Operating Officer and Jonathan Truskier, Director of Cell Development
Our electric infrastructure is aging, and it is being pushed to do more than it was initially designed to do. The power grid is hence continuously reinforced with renewable energy sources to make it “greener” and more resilient, with cutting-edge technologies that can greatly reduce the frequency and duration of power outages, reduce storm impacts, and restore service faster when outages occur. Supporting this push for green energy are more efficient and cost-effective power storage systems, which can reduce excessive dependence on grids and help governments meet their net-zero carbon emission goals.

Recently, the California Energy Commission—with the intent of ushering in better residential energy storage systems—proposed a grant to help promising startups fund their innovative ideas. Five were chosen from 50 applicants, but the one that stood out was Zelos Energy—a company developing rechargeable alkaline manganese-zinc (MnZn) batteries.

Zelos Energy was chosen for its innovative battery technology, which leverages the chemistry of common household AA batteries with a manganese cathode and a rechargeable zinc anode. These elements are non-volatile and can withstand extreme temperatures without failing or igniting, making them suitable alternatives for lead-acid (LA) and lithium-ion (Li-ion) battery systems.

“Our MnZn batteries are also cost-effective and can store the converted energy from renewable energy sources like solar panels and wind turbines for longer periods,” says Sasha Gorer, co-founder and chief operating officer of Zelos Energy.

The company’s MnZn storage batteries are best suited for homes, apartments, and even small facilities with solar and wind energy installations. Lead-acid batteries have long been leveraged for uninterruptible power supply (UPS) owing to their low cost and safety profile, but the superior-performing MnZn batteries are supplanting the former as the storage systems of choice for renewable energy users.

“The MnZn battery production is also economical, safe, and environmental-friendly, giving it an additional edge over Li-ion batteries, which, despite their higher energy density, are expensive and often lead to safety hazards,” says Jonathan Truskier, director of cell development at Zelos Energy. Moreover, both manganese and zinc are quite abundantly available in nature, and can be easily procured through independent supply chains. From the chemistry standpoint, the two elements do not react easily with external compounds or produce toxic byproducts during battery development, giving it an extra nudge toward sustainability.

The company is currently ramping up its battery production capabilities by partnering with a large Asian manufacturer to commercialize its products in the form of prismatic cells (contained in rectangular cans) and cylindrical cells. Zelos Energy intends to make them available for customers across the U.S., including those from the automotive, defense, and marine sectors.

The company’s efforts will also bolster the drive toward a zero-carbon future by replacing the more hazardous and pollutant-generating power storage systems with easily-recyclable, biodegradable products. Zelos Energy is already taking steps to procure zinc and manganese from the surrounding regions, while shifting its manufacturing base to facilities powered by renewable energy sources. Zelos earned a score of 9.8 out of 10 in an environmental impact audit conducted by Boundless—an industry research and environmental impact analysis firm. Zelos Energy is among the closest to the zero-carbon goal, and others will soon follow the path carved by the company and increase their contributions to a sustainable future.

Description
Zelos Energy is developing rechargeable alkaline manganese-zinc (MnZn) batteries, which are cost-effective and can store the converted energy from renewable energy sources like solar panels and wind turbines for longer periods 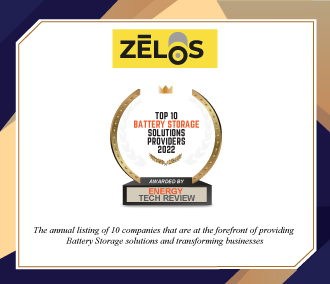